Posted on November 11, 2012 by cumbernauldhouse

Over the last year we have brought interpretive panels to the park to educate people on the wealth of history in the area. We have delivered community planting events and taken part in the Friends of Cumbernauld Glen fun day. We have worked with North Lanarkshire Council to ensure the park is maintained to a good standard and, following the recent National Cross Country Relay event which left the park in a poor condition, we pressed North Lanarkshire Council to make repairs as soon as possible. In conjunction with the local community we have delivered improvements to Cumbernauld House Park… but we’re not done yet.

We have recently started putting plans in place for some major projects which will enhance Cumbernauld House Park’s look, accessibility, and heritage. We are aiming to construct a full perimeter path network, from Park Way to Cumbernauld House and onwards to Cumbernauld Glen. We are working with other community groups in the area to bring a heritage trail to Cumbernauld, from Cumbernauld Village to the park. We have begun plans to study the feasibility of excavating the ruins of the former Cumbernauld Castle, with a community dig, with an aim to have them permanently on display. And, along with improved signage, we are working with North Lanarkshire Council to have the car park area and access road brought to an acceptable standard from it’s currently poor state.

We want to deliver these projects to help put Cumbernauld House Park, and Cumbernauld, on the map and to give the people of Cumbernauld a park they can be proud of and deserve… but we need your help. If you want to volunteer to help us deliver these improvements, or even just to have your say on the work we do, we would love to have you join our team, with commitment from as little as one hour a month up to whatever time you want to give.

If you want to volunteer please complete the form below. Take the time to have your say on how we improve your park.

We meet on the second Monday of every month at 7pm in the lower bar of Cumbernauld Theatre. There will be no December meeting so our next meeting will take place on Monday 14th January.

Posted on August 24, 2012 by cumbernauldhouse

Tomorrow the Friends of the Glen are having a fun day in the park.  We’ll be there to help.  All welcome. 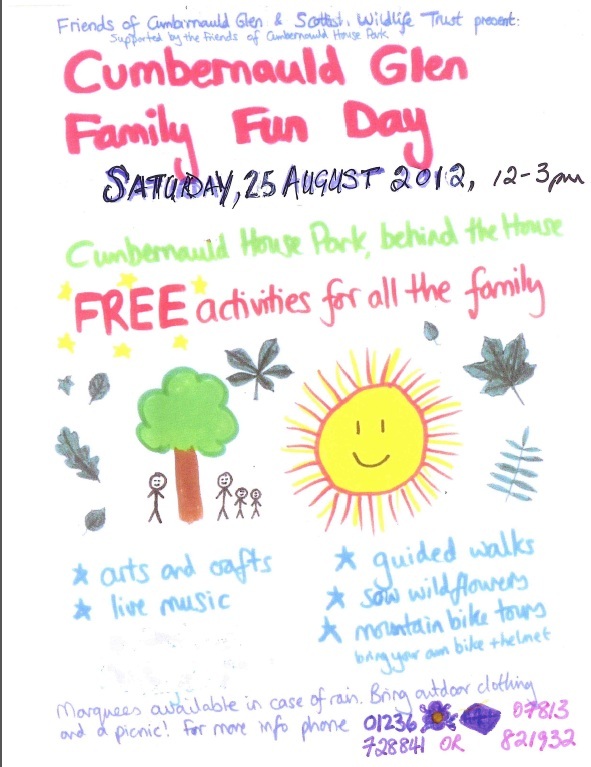 We are disgusted today to report that some mindless morons have pulled out about 2 dozen of the new saplings we planted earlier in the year. No idea why people think this is funny or acceptable. It is a real shame that some of the kids who planted these trees will not see them grow to their potential.

Do people not get taught community spirit anymore? I am sure the kids will be disappointed when they next visit their trees.

It’s a real shame that the warm weather always brings out this type of behaviour as this is the time that people should be getting the most out of the park.  We’d love to track down the culprits but as there is no way to police the park 24 hrs a day it’s impossible.

The thought that going into the park, drinking too much and wrecking the very space that your own townspeople and neighbours (not the council to be clear) have worked hard on all year is a good way to spend your time is a complete mystery to most clear minded folk.

Let’s hope the culprits have a think to themselves and perhaps feel a little guilt about the town they have let down.

Annual report from our Chairman

Posted on January 8, 2012 by cumbernauldhouse

I think we can consider 2011 to have been quite a good year for the Friends of Cumbernauld House Park.

We completed the interpretive signs project and it seems that they have been broadly welcomed by the local community. Furthermore, they have not (yet) been subject to any damage by vandalism.

We had a successful Fun Day, our first joint project with the Friends of Cumbernauld Glen.

We obtained 420 young saplings, free of charge, from the Woodland Trust and we had three successful planting sessions, two of which involved several members of the local community. Hopefully they will all grow to maturity over the next 10-20 years and will add to the diversity of the park. A small number of saplings (including Ann’s Royal Tree) have been kept for planting in the early spring.

Thanks to Kevin’s efforts on our behalf, North Lanarkshire Council have obtained five standard trees (around 2 metres high) to be planted in the park and we have marked out the places for them to be planted. The NLC squad are waiting for a suitable break in the weather for them to actually plant the trees.

Sadly, high winds have brought down a few trees in the park and NLC is , as yet, to clear away all the fallen timber.

Despite our disappointment that Cumbernauld House has been lost to community use, it is pleasing to see work progressing on the conversion of the house and its outbuildings into housing units.

(Almost) Anything is better than it lying empty and prone to vandalism!

On the down-side, we have, as yet, been pretty unsuccessful at recruiting new members to our group. This will become more of a probleman a couple of months time, when Beth and Gordon, two of our most active and enthusiastic members, will be leaving Cumbernauld for a new life overseas. We all wish them well, but the rest of us will need to do our best to recruit (at least )two new members to replace them!

Posted on November 20, 2011 by cumbernauldhouse

Afternoon was a great success for the tree planting.  We had a great turnout from the Scouts who helped us get the rest of the trees planted.  What we did notice though was the sheer number of members of the public who

turned out to help.  With 20 people in the morning and about 30 in the afternoon that was a great turn out.

The trees were planted in 8 different locations throughout the park.  and hopefully they will remain weather and vandal proof!  The rain came on in the afternoon after a dry morning but it didn’t seem to deter folks.  it’s great to see that the people of the town are willing to come out and support their local park.  With the trees and the interpretative panels it’s been a great year for the Friends of the park as we’ve managed to make a lasting difference to the park and the people using it.  Long may this continue and long may the community spirit shown today in the park!

Thanks so much to everyone who turned out today – you were a credit to the town!

Tree planting in the park.

Posted on November 20, 2011 by cumbernauldhouse

Today we are planting trees in the park.  The group recieved a package of 420 trees from the Woodland trust and we’re planting in two sessions.  The morning session was a great success with about 20 people in total turning out to help out with the planting.

After another session last Wednesday we are well on our way to have all the tree’s planted.  One final session will take place at 2pm this afternoon.

Check out some pictures from the morning session below.

New guides to the Park!

Posted on September 1, 2011 by cumbernauldhouse

This Saturday (3rd September) will see the unveiling of a year long project for the friends of Cumbernauld House Park.  The team has been working hard to put together interpretative panels for the park so that park users and local people can have  a greater insight into the history of the park and town as well as the Flora and Fauna of the area.  The project has been helped by assistance from Awards for All, AG Barr and Highland Colour Coaters Ltd who have all lent their support to this community project.

The panels have information on the two Cumbernauld Castles, Gregory’s Girl filming, visits from Mary Queen of Scots, Cumbernauld New Town and excellent insights into why Cumbernauld House looks the way it does as well as a look at the trees and wildlife of the area.  There are lots of

interesting pieces of information across the 5 boards throughout the park.

The panels will be unveiled at 10am on Saturday by local MP Gregg McClymont and the Friends hope to have representatives of the funders there also.  All are welcome to come along and see the unveiling of a new permanent feature for the biggest park in North Lanarkshire.

Fun Day in the Park

Saturday was the Fun day in the park arranged by the Friends of the Glen and ourselves.  Despite the weather there was a great turnout with well over 100 people coming along to take part in the festivities

The day was split across 5 different tents and lots of activities.  Wood carving was in one tent where children could watch as an expert at wood carving created whistles for them.  Kids could win a prize in the hook a duck competition and learn how to make a bird feeder in another tent.

The main tent housed the friends of the glen planting workshop and plaster moulding as well as quizzes and colouring sheets.  The refreshments stall was well used throughout the day selling tea and coffee and a selection of snacks.  The other large tent held our

information sheets with people from Palacerigg giving away free seed samples and our own Beth McCormack selling her excellent glass creations.  There were historic tours of the park and the day was rounded off by a nature ramble.

Well over 100 people turned up on the day despite the weather which was changeable to say the least.  Ultimately a good

time was had by all and the raffle for the decorative cake will be drawn at our next meeting early next month.

Plus we had some coverage on the STV Cumbernauld site too!

All in all a great day with so much going on and no child left empty handed as they were all encouraged to create something on the day.

eavy storms have battered the park over the past couple of days.  One of the biggest trees in the park behind Cumbernauld House has been felled completely.  The iconic tree at the top of the hill in the park has had it’s largest branch which was

climbed on by generations of Cumbernauld children knocked down completely which is a real shame and we’re sure that many residents will remember climbing here as children.

Lots of branches are off of the trees too with the path at the back of the allotments completely covered by branches and leaves.  really heavy areas of it.  The council will have their work cut our trying to tidy up this mess that’s for sure.

It’s going to take fair amount of work to clear up the park and it’s going to look a little differently when it’s all done that’s for sure.

Posted on November 1, 2010 by cumbernauldhouse

Minutes for the October meeting are now online at this link.